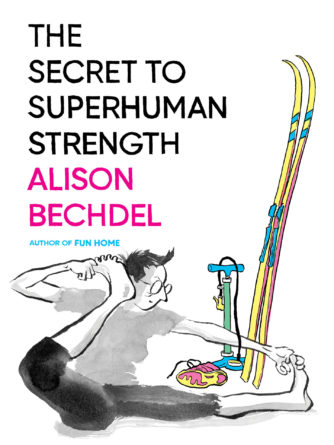 Alison Bechdel reflects on a lifetime of chasing the burn in her most recent graphic memoir, The Secret to Superhuman Strength. In previous graphic novels, Bechdel explored her father’s suicide and her relationship with her mother. Here Bechdel is at her most autobiographical, chronicling her obsession with fitness from birth through the present.
Bechdel begins her search for superhuman strength after seeing Jack LaLanne on television in the 1960s. Later bullied and shamed in high school, Bechdel discovers freedom in fitness: skiing, running, martial arts, biking, yoga, and more. Throughout the decades of her life, Bechdel’s relentless focus on physical fitness exists alongside addictions, affects her relationships, and is a mainstay of her work-life imbalance. Her physical journey overlaps with her inner journey and each breakthrough moment of physical flow coincides with a significant spiritual shift in pursuit of “the feeling of [her] mind and body becoming one.” In Bechdel’s world and in this graphic novel, references to zeitgeist workouts and outdoor clothing brands appear alongside William Wordsworth, Samuel Taylor Coleridge, Ralph Waldo Emerson, Margaret Fuller, Jack Kerouac, and Buddhist and Hindu scripture.
Bechdel uses the comic form to reflect her journey and personality. She often breaks from a sequential panel structure to set narrative pacing, while frequent asides to the reader hilariously obliterate the fourth wall. Double-page spreads indicate important narrative points, and a brilliant use of color is a welcome departure from previous graphic memoirs. Bechdel’s partner, colorist Holly Rae Taylor, has rendered Bechdel’s line drawings into exquisite full-color watercolors that bring depth and weight to Bechdel’s life.
The Secret to Superhuman Strength will appeal to artists, illustrators, and everyone who has struggled with fitness, deadlines, creativity, and life balance. It is appropriate for public and university collections, especially in the areas of Gender Studies, Religion, and Art.

This site is part of the ARLISNA network on Humanities Commons. Explore other sites on this network or register to build your own.
Terms of ServicePrivacy PolicyGuidelines for Participation
Skip to toolbar